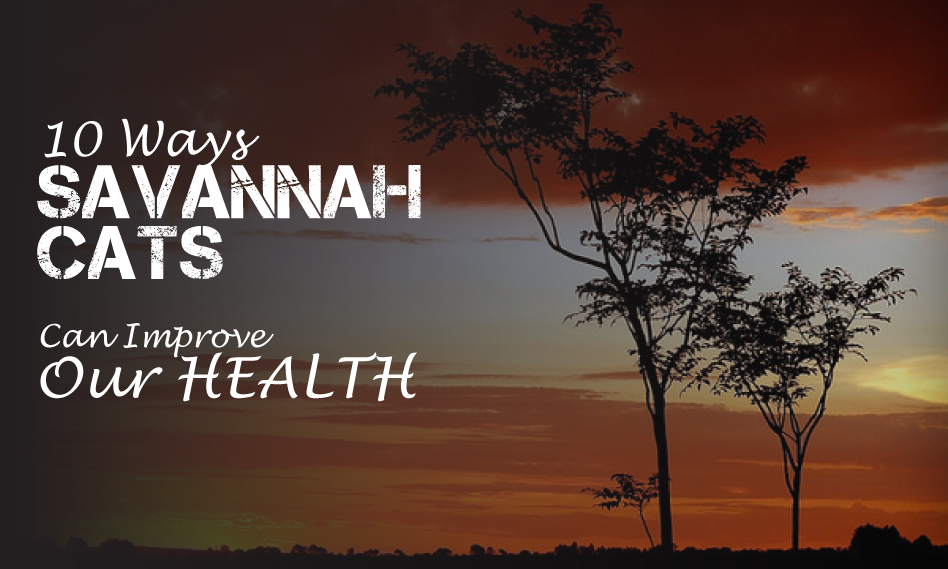 There are tons of ways that your Savannah Cat can make you a healthier, happier person. From reducing your blood pressure to helping with allergies. Here are 10 perks of owning a Savannah Cat. We have a ton of detail and scientific explanation below, but we also wanted to package it into an infographic for fun! Take a look at both below. Also, you are welcome to share this infographic on your blog or website — we have the code ready for you below (just copy and paste).

Want to share this on your site? Just copy the code below!

Alright, now that you have taken quick peek at the infographic above on how owning a Savannah Cat can make you a healthier person, read on for the more in depth analysis for each point!

This seems far-fetched, but there is actual science that backs this up! According to a study performed by Fauna Communications, when a cat purrs, it produces vibrations which are the source of many positive health benefits for humans. The frequency of the purrs that a cat produces range from 20 to 140 Hz. There is scientific evidence that frequencies between 25 and 50 Hz are the optimal frequencies for promoting better bone strength. The next best range of frequencies for bone strength is 100 to 200 Hz. As you can see, the two best frequency ranges for promoting better bone strength are both part of the range of frequencies that Savannah Cats produce. Absolutely fascinating!

2. Savannah Cats Can Aid in the Healing of Other Injuries to the Human Body

The same frequencies mentioned in the last point can also aid in the healing of other injuries to the human body such as infection, swelling, muscle injuries and tendon/ligament injuries. The lower frequency purrs can help alleviate painful and achy muscles. Cats use these frequencies to keep their bodies in tip-top form as well — maybe this is why we always say that cats have 9 lives!

3.  They Can Lower Your Blood Pressure

Petting animals, in general, is proven to lower your blood pressure. A Savannah Cat’s purr also produces lower anxiety levels and lowers blood pressure. Obviously, a healthy reduction in blood pressure produces many positive effects that manifest themselves in various ways. Several of those outcomes are described in the following points! According to a study performed by a psychologist from the University of New York at Buffalo, cat owners’ blood pressure spikes caused by stressful situations were about 50% lower than non cat owners.

Petting a purring Savannah calms your nerves and relieves stress. This is the case with other animals that you can pet, but there is an added benefit of a cat — they do not require nearly as much hands-on attention as a dog, which makes owning a cat even more beneficial.

5. Savannah Cat Owners Have a Lower Risk of Cardiovascular Disease

According to a study done by the University of Minnesota’s Stroke Institute, located in Minneapolis, owning a cat can reduce your risk of heart attack by about 30%! The study considered data from over 4,000 Americans between the ages of 30 and 75. In just over half of the 4,000+ cases that were studied, the subject was a current or former cat owner. The subjects that were either a former or current cat owner at the time of the study, showed a 30% lower risk of death from a heart attack in comparison to the non cat owners.

6. Owning a Savannah Can Reduce Allergies and Asthma in Children

In a study done by the Clinical & Experimental Allergy journal, teenagers that grew up with a cat in their home during their infancy, were 48% less likely to develop an allergy to cats. This study followed the subjects through the age of 18 — this was the first study to go that in depth. The big question with this study is that, while they looked into whether or not the parents were allergic to animals, they did not look at the extended family history of allergies to animals. What that means is that the kids that grow up in homes without cats, could be the ones that are more likely from a genetic standpoint to develop allergies (hence why their families don’t have pets).

7. Caring for a Savannah Cat Can Combat the Symptoms of Depression

According to Dr. Ian Cook from the Depression Research and Clinic Program at the University of California Los Angeles, “Pets offer an unconditional love that can be very helpful to people that suffer with depression.”

Some ways that owning a Savannah Cat can help with depression are (there are many benefits that are not listed here):

8. Interacting With a Savannah Can Improve the Symptoms of ADHD and Autism

With ADHD, it is often tough to relax, focus and even fall asleep. There are tons of studies showing that people with ADHD have much lesser symptoms when they are in regular contact with a cat or a dog. Another benefit of having a pet manifests itself if you have a child with ADHD — caring for the pet is one of the best ways to teach how to follow through and be responsible.

Cats can also be a huge help to kids with Autism. The friendship that an autistic child forms with his or her cat can prevent the natural behavior of withdrawing from social interactions. This relationship gives them the confidence to form friendships with others around them.

9. Savannah Cats Can Improve Your Breathing

A Savannah Cat’s purr can improve symptoms of Dyspnea, which is difficult or labored breathing (shortness of breath) caused by lung and heart disease. This may be due to the relieved stress and lowered blood pressure as described above!

10. Owning a Savannah Provides a Sense of Community

Any Savannah Cat owner understands that having a pet cat is just about the best icebreaker in the world. It gives people something to talk about, ask about, and focus on. Along the same lines, it is also a great way to make friends, since cat owners have plenty of things in common.

Savannah owners love discussing the antics of their lovable cats. By owning a Savannah, you become part of the “Savannah Cat community” and, simply put, being social is healthy!

Thanks for reading and sharing! Be sure to let us know if you know of other notable health benefits of owning a Savannah Cat by leaving a comment below!

Also, if you want to receive great tips and recommendations about Savannahs, click here!

Close Menu
STAY IN TOUCH!
Get the latest news, tips, & recommendations straight to your inbox!
SUBSCRIBE NOW
Your Information will never be shared with any third party.
×
Keep Your Savannah Happy!
Get all the latest tips, advice and resources on how to keep your Savannah as happy as ever!
Yes Please!
No thanks, I don't want my Savannah to be happy.