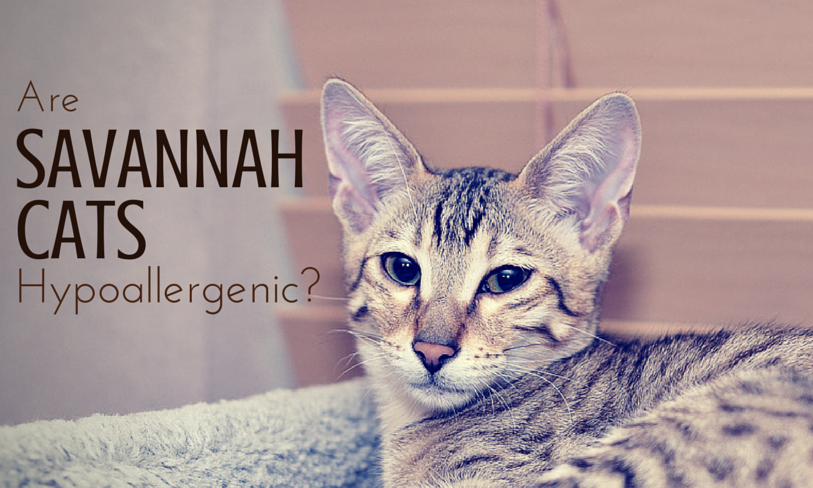 When Deciding What Pet To Bring Into Your Home, Whether Or Not They Are Hypoallergenic Can Play A Huge Role

Anyone with asthma or allergies can understand that when deciding what pet to bring home, you always have to consider how they may affect your breathing or your allergies. One of the most frequently asked questions we see regarding these cats is: “Are Savannah Cats Hypoallergenic?” In this article we will take a look at what the other experts and breeders have to say on this subject, as well as give our opinion on this heated debate.

First, a little background on my personal situation when it comes to allergies and asthma:

I have always been a pretty severe sufferer from allergies in one way or another. As a child, I was allergic to dogs, cats, grass, trees, pollen, mold, passion fruit, tomatoes — you name it, I was allergic to it. I remember always being so jealous of my friends that had pets. I wanted one so badly, but the answer was always, “No, you won’t be able to breathe because of your allergies.” Finally, I convinced my mother to look into hypoallergenic pets. We settled on a dog, specifically a Bichon Frise named Sugar. I feel strongly that from that day on, I started reacting less and less to animals that I was allergic to.

As I got older, my allergies continued to lessen. Now, as an adult, I consider myself to fit into the standard class of people that have Spring and Fall allergies, with a somewhat more severe allergy to cats that shed a lot. I take an Allegra pill daily during seasons where my allergies tend to be worse, and simply forget to do it in other seasons because my allergies almost completely subside.

Okay, maybe a bit too much detail, but I figured it would be helpful for comparing your own allergies as you read on!

Why Would Someone Say That Savannah Cats Are Hypoallergenic?

I believe the confusion comes from the fact that a Savannah Cat is a hybrid of a domestic cat and a wild African Serval. Servals’ dander is way different than your standard domestic cat and they seem to shed much less. There are many reports of people, that are typically allergic to cats, saying they were not nearly as allergic to their Savannah Cat. When one reports something like that, it can spread like wildfire and cause a lot of confusion.

Are Savannahs Hypoallergenic? Here’s What Other Experts Have To Say:

Ryan Wismar of SavannahCatPrice.com says that they are, indeed, hypoallergenic. But, he says there is a catch — Ryan states that Savannahs can only be classified as hypoallergenic because of the real meaning behind the word “hypoallergenic.” He goes on to state that:

While I agree that the meaning of the word “hypoallergenic” may be a bit arbitrary, I do not agree that his definition is the correct one. When I looked up the official definition of hypoallergenic, it read: designed to reduce or minimize the possibility of an allergic response, as by containing relatively few or no potentially irritating substances. Based on that definition, I would say that Savannah Cats are not hypoallergenic as, while they may have less than a standard domestic cat, they still have plenty of potentially irritating substances for people with allergies to cats.

Other experts seem to agree that they are not hypoallergenic:

According to the message boards over at SavannahCatChat.com, they stress that Savannah Cats are not hypoallergenic. A topic from Paige, the administrator of the website, states:

Savannah Cats are not hypoallergenic! We have discussed it here and everywhere…they may be less allergic for some people, depending on the person, but….they are NOT hypoallergenic[cats]

By doing a bit more research, we also found that PetMD does not list the Savannah Cat breed on their list of hypoallergenic cat breeds. They also go on to say that technically, there are no 100% hypoallergenic domesticated cats. If that doesn’t answer the question, I don’t know what will!

SVrescue.com has “Savannahs are Hypoallergenic” at number 9 on their list of Savannah Cat myths! The same stance is taken on SpotlightSavannahs.com and many other websites from Savannah Cat breeders. Based on this, we can definitely assume one thing — if the breeders are saying that Savannahs are not hypoallergenic, then there is no way the claim that they are hypoallergenic can be true. As the breeders are the ones selling these cats, they would want to increase the market of people who they can sell them to, but even they say that there is no way that they can be classified as hypoallergenic.

In summary, the consensus appears to be that Savannah Cats are not hypoallergenic! I hope that helps, but it looks like you will have to schedule some time with someone that owns one so you can go spend several hours in a home that has had a Savannah living there for a significant amount of time — that is the only way you will be able to gauge your reaction to having one in your own home! Be sure to leave a comment on this post and let us know your story with allergies and whether or not you reacted to a Savannah Cat! Thanks for reading!

Close Menu
STAY IN TOUCH!
Get the latest news, tips, & recommendations straight to your inbox!
SUBSCRIBE NOW
Your Information will never be shared with any third party.
×
Keep Your Savannah Happy!
Get all the latest tips, advice and resources on how to keep your Savannah as happy as ever!
Yes Please!
No thanks, I don't want my Savannah to be happy.